Gazing balls, also known as gazing orbs, have been incorporated into both formal and informal gardens for centuries. Gazing balls are typically seen tucked alongside pretty flowers and fountains or grouped together as an artistic garden feature.

Gazing Balls in the Garden

Gazing balls come in so many colors and styles that they suit just about any garden setting, from rustic to elegant and everything in between. Here are a few ways that you can incorporate a gazing ball into your outdoor space.

Gazing balls add height, texture, color and interest when tucked alongside flowers in your garden. Pick a stand and ball style and color that best suits the garden where you wish to place the ball. Be sure that you accommodate for the mature size of your plants. You do not want the plants to hide the ball, but they look lovely hugging the stand or hanging behind the ball.

Several different sized gazing orbs grouped together make a dramatic impact on any garden space. Purchase stands in varying heights and choose ball colors that coordinate with your existing landscape. Place balls in a location where they will be most enjoyed. Use a low voltage spotlight so your gazing ball group can be enjoyed when the sun goes down.

Beside a Water Feature

Gazing balls and water features complement each other nicely. Frequently seen together, this pair makes a stunning display in any garden setting. The light and water reflect off of the ball and produce a dramatic effect that adds to the beauty of the ball. If you have room, place a couple of gazing balls next to your pond or fountain and landscape around them.

Smaller versions of pedestal sitting gazing balls, known as faerie balls, hung from trees adds a dramatic effect to any outdoor space. Hang several of these smaller balls from heavy wire and hooks from a sturdy branch. Placing an uplight on the balls will allow their beauty to shine at night.

By the Front Door

Welcome guests to your house with a beautiful gazing ball perched on an artistic stand. If you have enough room, place one on either side of the door. Be sure to place the balls far enough away from the door so that they will not get accidentally knocked off of their stands.

Gazing balls are easily incorporated into, and can be used to help define, particular unique garden themes. The type of ball that you choose and how you display your ball will convey your chosen theme.

To make your rustic garden really shine, try placing three or five glass gazing balls of different sizes and colors into a rusty old wagon and setting it in your garden. This creative mix of country pops when you add the gazing balls to the wagon. Other props, such as old farm equipment or even garden tools, are easily embellished with gazing balls. Place an old pitchfork in the ground on an angle and set a rusted red gazing ball at the bottom of the fork for another eye-catching garden display.

The key to using gazing balls in a rustic or country themed garden is to think outside of the box. Look around for old milk crates, tools, boxes, old bird baths, and other props to use with your gazing ball and forego the "traditional" pedestal arrangement.

The original use of gazing balls began in a formal fashion. Gazing balls are quite at home in any elegant garden setting. In a formal garden setting, it is important to pay attention to selecting a refined pedestal and making your gazing ball or group of balls a focal point. When placed in a group, the balls will have a more dramatic effect. For a modern and elegant feel, try using copper or bronze balls. When placed next to a reflection pond or incorporated into garden sculpture, gazing balls add a fresh edge to any formal garden.

Gazing balls add a dramatic impact to any tranquil Zen garden setting. The cool metal of a polished silver gazing ball blends well with the natural elements in the garden and can be placed directly on pebbles or rocks in a medium to large garden or on a tray in a small garden. Try filling a metal tray with a little bit of water and placing a silver or copper gazing ball in the center of the tray for a dazzling centerpiece in your Zen setting.

The key to a Zen garden is simplicity; try to avoid groups of gazing balls or bulky stands.

Gazing balls are highly fragile and care must be taken when setting them up or moving them. 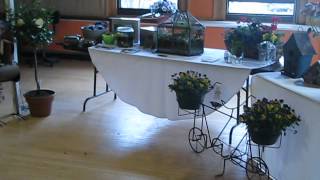 Top Tips for Attracting Butterflies to your Garden

Garden Fountains: 11 Reasons Everyone Should Have One